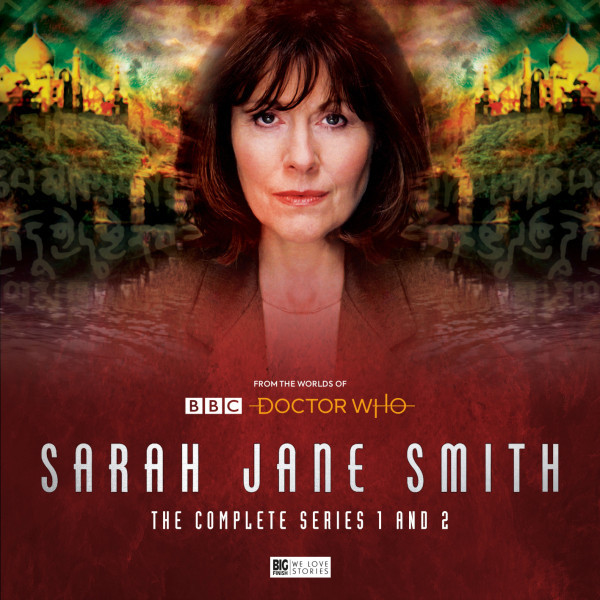 Download
US $30.12
Buy
Login to wishlist
48 Listeners
recommend this

Years after the Doctor returned her home to Earth, Sarah Jane Smith is still haunted by her past. Dark forces are moving against her, looking for revenge. Is Sarah ready to face her destiny?

Six months after the last part of her undercover investigative TV series for Planet 3 Broadcasting went out, Sarah Jane Smith is running scared. Living under false names, her true identity compromised, she has few friends and fewer clues as to her pursuers.

Enter three people who will change her life: the mysterious Mr Harris, old friend Ellie Martin and a guardian angel in the shape of the roguish Josh Townsend.

Now, all roads lead to the village of Cloots Coombe in Wiltshire but will she find answers she needs there?

1.2 The Tao Connection by Barry Letts

The body of an old man is found floating in the Thames, although the DNA of the corpse corresponds to an 18-year old friend of Josh and Ellie.

Sarah Jane heads towards West Yorkshire in a bid to discover what killed the man, why someone is kidnapping homeless teenage boys and whether there is a link between that and the retreat of philanthropist Will Butley which hosts The Huang Ti Clinic.

Sarah discovers that there is more to ancient dark sorcery than she previously believed.

1.3 Test of Nerve by David Bishop

Sarah Jane Smith receives a mysterious gift with a cryptic message. The London Underground will suffer an horrific terrorist attack during rush hour unless Sarah can find and stop those responsible.

As rush hour draws closer, the terrifying reality of the threat becomes all too apparent. One friend is murdered and another abducted.

Sarah must be willing to sacrifice everyone and everything she holds dear to save the city. This is one deadline she cannot miss!

Sarah and Josh set off for a well-deserved break in a remote Romanian village, hidden deep in the Carpathian Mountains. They're staying with Sarah's old friend, Yolande Benstead, a retired journalist and ex-pat who lives in an eerie mansion with no one but her mysterious manservant for company. By chance Sarah has arrived at an appropriate time - the village has become the setting for a top-secret International Peace Conference.

Sarah is awoken in the night by a terrifying apparition. Is it a ghost or just a figment of her imagination? What is that unbearable noise? And will the others believe her story?

It's down to Sarah and Josh to piece together the mystery that surrounds this ghost town...

A bio-warfare scandal from the 1940s takes Sarah to a remote island in the Indian Ocean. She pursues the scoop with a fellow journalist from her former company, Planet 3. But why won’t she contact her friends back in the UK?

The more she investigates, the less Sarah recognises that she is the story. Josh and Natalie discover that Sarah has been searching for pursuers in the rear-view mirror for so long that she hasn't noticed who’s now in the driving seat.

A long way from home, and far from safe, will Sarah see the dangers in her present and the enemies from her past before it’s too late?

Sarah travels to Antarctica where her friend, Will is part of a research team studying global warming. But someone at Nikita Base is a murderer and everybody has a guilty secret. When a massive storm severs all communications, the killer strikes and the truth is revealed.

Will anyone get off the ice alive?

Sarah has been attacked, stalked and shot by the acolytes of a doomsday cult.

When she tries to turn the tables, she discovers the Crimson Chapter has a weapon that could claim millions of lives - and her own actions may have instigated their genocidal plan.

Sarah Jane Smith is still dealing with the tragic consequences of recent events when she is offered the chance of a lifetime - a place on the world's first tourist flight into space.

The trip's sponsor, Sir Donald Wakefield, believes it is her destiny. But after her recent experiences, what does Sarah still believe in?

This release features several instances of mild swearing which may not be suitable for younger listeners.

Shop all audiobooks
Next release in this range: Sarah Jane Smith: Comeback